Home » Blog » LEDs vs T5s: Why T5s Are Still an Excellent Option for Reef Tanks 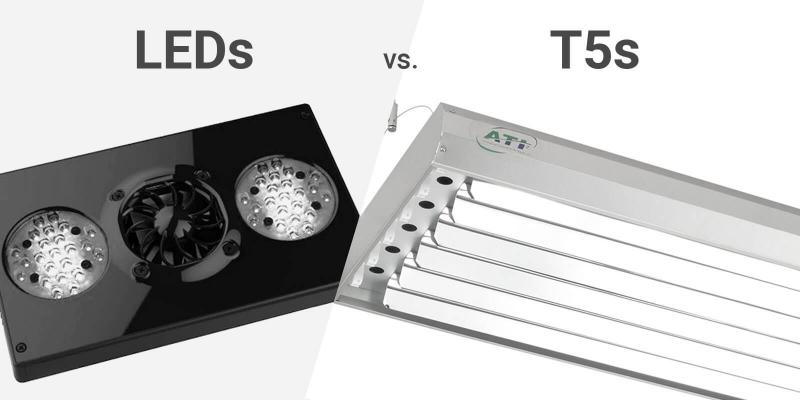 LEDs vs T5s: Why T5s Are Still an Excellent Option for Reef Tanks

One of the longest running debates in the aquarium industry has been LEDs vs T5s and which lighting is best for aquariums. Over the last few years, there has been a major shift away from T5 lighting, and towards LED lighting. This shift has been driven predominantly by the belief that LED lighting is better in quality and significantly more energy efficient. And while LED lights generally use less energy than T5 lighting – the difference is not as dramatic as most folks may think.

Let’s take a closer look at some of the benefits and drawbacks of both LED and T5 aquarium lighting.

LEDs vs T5s: Ease of Use

Most modern LED light fixtures provide full control over the color and spectrum of lights. They are often loaded with options, such as the ability to control your lighting from just about anywhere, storm simulations and a variety of other control features.

With all of these options, it is easy to change the look and feel of your aquarium lighting, simply by modifying the program. However, it can be challenging to program an LED fixture in a way that suits the needs of your coral, while at the same time giving your tank the look you desire.

The question to ask yourself is – Do I need all of these bells and whistles?

If you like to tinker with your lights, LEDs are a great option. However corals prefer stability, so every time you change your lighting, it can negatively impact the health of your corals.

While some T5 lights have built-in WiFi and are programmable, the majority of T5 light fixtures are plug-and-play. You simply load your choice of bulbs into the fixture and plug it in. The T5s will do the rest. This includes growing corals without fussing over unnecessary bells and whistles. And with T5 lighting, there are no hot spots to worry about. You simply place your coral at the correct tank depth and let them grow.

LEDs are typically more intense directly under the fixture producing an area of high intensity directly below the light and lower intensity as the light radiates out.

This requires careful planning. High light corals need to be placed directly under the fixture and lower light corals need to be placed in areas that are not directly below the fixture. LEDs are also a pinpoint source of light, which can leave noticeable shadows under overhangs and corals. LED lights with poorly designed optics can also leave lines of specific colors on the sand and rocks producing what is known as the “disco ball effect.”

T5s, on the other hand, are a linear source of light, so the light produced by a T5 bulb is spread out over the entire length of the bulb. When paired up with a quality T5 reflector, this produces an even blanket of light that bathes the whole tank, producing far fewer shadows and little-to-no hot spots. T5 lighting is uniform and intense – filling caves and overhangs – which provides corals in the darker area of the tank with more light to thrive.

LED lighting gives new meaning to the phrase “With great power comes great responsibility.”  All of the power, control, colors, features and settings that come with LED lighting also means you have to pay closer attention to the health of your corals. Using the wrong combination of intensity, colors and settings can wreak havoc on your reef tank in short order. So while all these features can be fun and entertaining – who doesn’t like an occasional lightning storm after all – corals prefer stability.

In the case of ATI T5 bulbs, there are 5 different bulb color choices that can be used in any combination to create your desired look. And since the output of the T5 runs the entire length of the bulb, once you pair each bulb with a quality individual reflector, you get a highly-uniform blanket of light that covers the entire aquarium. Just be sure to change your bulbs on a regular 6-12 month interval, as the output of a T5 bulb decreases as it is used.

LEDs are very efficient and can save a ton of money on electricity compared to metal halide lighting. But compared to T5 lighting, the differences in energy usage and cost of ownership are not nearly as dramatic.

A popular option option to light a tank of this size with high-end LEDs would be to use 3x Ecotech Marine Radion XR30w Pro lights. This setup will run you over $2600 including mounting hardware and use 570 watts of energy at full power. It is capable of growing almost any coral and will generally last years with very little reduction in light output.

To light the same aquarium with T5 lighting, a popular option is the ATI 8x80W Sunpower fixture. This fixture with eight bulbs will run about $1000 including mounting hardware and use 640 watts of energy at full power. The bulbs have to be replaced every 6-12 months, which will cost approximately an additional $200.

If you run your lights for 10 hours per day and are paying $0.15 per kilowatt hour (most folks pay less), you will spend about $38 extra per year to run the ATI SunPower, compared to the EcoTech Marine Radion Pros.

At $200 per year for bulbs and $38 per year for power, you would need to run your Radion lights for just shy of 7 years to break even from a cost standpoint.

With the ability to control the intensity of each individual color, LED fixtures allow for a wide range of different colors and intensities. LEDs also offer a nearly endless ability to customize the lighting schedule. Plus, they are usually loaded with applications and features like cloud cover, lightning storms and moonlight simulations.

Control for T5 fixtures is generally more limited. This makes setup a lot easier. Many T5 fixtures, such as the ATI SunPower, include two power outlets to run two channels with basic timers. By staggering the timing of when the bulbs turn on and off, it is possible to create a sunrise and sunset effect. However, more advanced lighting features like moonlight simulations and lighting storms are not possible.

LEDs vs T5s: The Verdict…

LEDs are fun and often have cool bells and whistles. It sounds like fun to be able to turn your lights on or off from the other side of the world. And the endless customization options, colors and features, make it hard not to be enticed by all of the possibilities that an LED system can provide like lightning storms, cloud coverage, moon lights and others.

However, most of these features mentioned are for you – and not for your coral. So if you don’t need to turn your lights on or off from your smart watch, or any of the fun-sounding features mentioned here, consider T5s. The quality of T5 lighting is hard to beat, the lights are generally easier to use and the initial investment is generally a lot less. Your corals (and your wallet) may thank you.

Sign up to receive email news and updates from ATI North America.